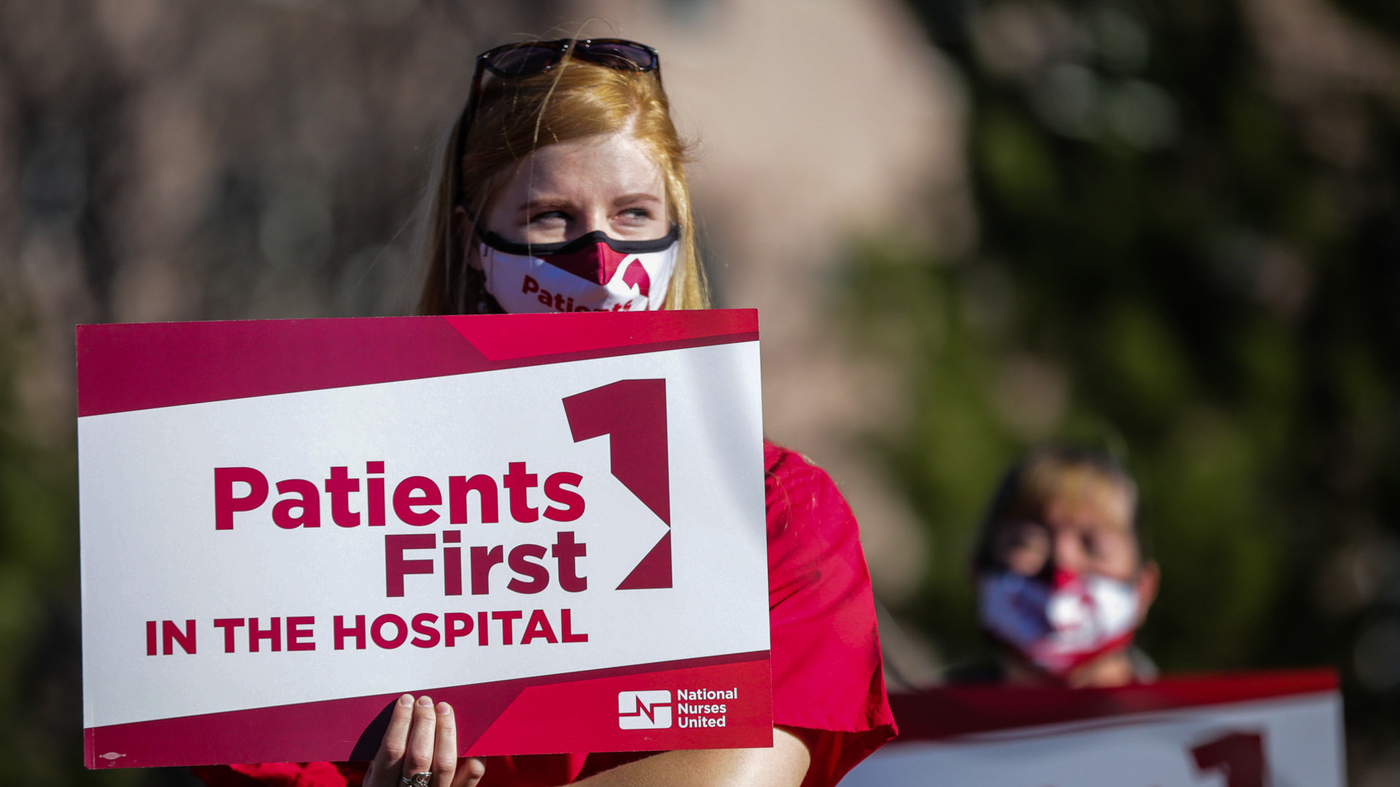 Harold Burch lives in a home with a spectacular view in Paonia, a rural part of Colorado’s Western Slope. But that’s been little consolation to Burch, 60, as he’s battled a cascade of health problems during the pandemic.

“It’s been a real rodeo,” Burch says. “It’s been a lot of ups and downs and lately it’s been mostly just downers.”

Burch has battled chronic osteoarthritis, rheumatoid arthritis and had two major intestinal surgeries. One specialist he was seeing left her practice last year. Another wouldn’t accept his insurance. Then, Nov. 1, he started experiencing major stomach pain.

“When we talk terrible problems, I can’t leave the house,” he says. He says he hasn’t eaten anything substantial in three weeks.

Burch had to wait that long to be seen by a primary care doctor. He says the doctor told him: “‘If things were different, I would tell you to go to the hospital and be diagnosed, have some tests run and see what’s going on with you.’ But he says, ‘as of today, Delta County hospital is clear full. There are no beds available.'”

The COVID variant delta has overwhelmed the Colorado county of the same name. Hospitals on the Western Slope have been slammed for weeks, and the statewide picture is similarly grim. As of Monday, 1,294 patients were hospitalized with COVID-19, according to the state’s coronavirus website. Half of the state’s hospitals said they anticipated a staffing shortage in mid-December; more than a third of them anticipated ICU bed shortages at the same time.

And behind those numbers, patients — and health care workers — are feeling the impact.

Burch’s doctor told him he might have to wait hours in the ER, perhaps with people who have flu or COVID-19 symptoms. So Burch stayed home.

He’s fully vaccinated. But just 57% of people in Delta County have at least one dose of vaccine. And 84% of hospitalized COVID-19 patients in Colorado are not vaccinated.

“It’s really frustrating because I did the right thing and like so many other people have, and we’re being just kind of like told, ‘unless you have a really serious problem, like a heart attack, a stroke or something like that, we really don’t have time to mess with you,'” Burch says.

Diann Cullen is a 72-year-old retiree from Broomfield, Colorado, whose doctor told her that her hernia surgery would have to be postponed for weeks feels similarly. She says her reaction was: “Extreme frustration, actually anger … He flat out told me we can’t even do it because of too many COVID patients.”

A system in crisis

Burch’s situation is not uncommon this fall, as the state faces its second-worst COVID-19 surge for hospitalizations and deaths. Hospitals are under tremendous strain and that means delays and changes from normal care, as strapped providers do more with less.

“Hospitals across Colorado are in critical condition. We have been at 90%-plus capacity in our ICU and acute care beds for weeks now. And unfortunately, there doesn’t appear to be an end to that situation in the near future,” says Cara Welch, a spokesperson for the Colorado Hospital Association.

Longmont High School teacher and coach Jeff Kloster holds a sign in support of Longmont United Hospital nurses on December 2, 2021, outside the hospital. His wife Kris, a nurse there, was one of the speakers at the protest.

Longmont High School teacher and coach Jeff Kloster holds a sign in support of Longmont United Hospital nurses on December 2, 2021, outside the hospital. His wife Kris, a nurse there, was one of the speakers at the protest.

What’s pushing hospitals into crisis is dealing with a surge of COVID patients on top of other patients who have delayed care, all with a shortage of staff, says Robin Wittenstein, the CEO of Denver Health, which runs one of the state’s biggest hospital and clinic systems.

“They’re coming into hospitals now sicker than ever before. And they’re coming in larger numbers than we’ve ever seen before,” Wittenstein says. “Our system is on the brink of collapse.”

At the academic medical center UCHealth, ICU Dr. Abbey Lara says the crush of unvaccinated patients means patients face longer waits or they don’t get much-needed diagnostic tests. In the worst-case scenario, “patients who could have survived something had their life cut short because they weren’t able to access care,” she says.

And when there are too many patients being treated by too few staff, Lara says, that ratchets up the difficulty for health care workers.

“I just worry that there’s going to be not only a lot of turnover in the near future,” Lara says. “But I think that access to health care is just going to get even worse in the future.”

The situation is driving more nurses to speak out, like at an event earlier this month held across the street from Longmont United Hospital, in Longmont, Colorado, about 50 miles north of Denver.

“And the last few weeks we have regularly had RNs taking three, and sometimes four patients, at a time,” she says, which prompted boos from the crowd.

That’s unsafe, she says, and now the nurses are looking to unionize. Longmont United says it is focused on the well-being of patients and staff and that its top priority is high-quality care.

“I have lately been in a state of chronic stress over the crushing guilt that I feel to ensure my patients get the care they need. And yet, somehow still care for myself and my family,” Chrisley says.

Kris Kloster has been a nurse for 32 years, much of that in the ICU. So she’s seen layoffs and staff reductions even before the pandemic hit. Now ICU nurses are dealing with colleagues quitting, restrictions on visitors, worries about catching the virus, anger from some patients who do not believe they have COVID-19.

At the same time, they must cope with suffering and deaths. It’s been “soul sucking,” she says. “That’s the hardest I’ve ever worked.”

Kloster has been speaking out in hopes that Coloradans will understand the physical, emotional and psychological toll on nurses.

“This kind of staffing, this kind of stress is not sustainable,” Kloster says. “And something has to change.”

Longmont United Hospital nurse Kris Kloster speaks to other nurses and supporters December 2, 2021, outside the hospital. They say the hospital is severely understaffed, their workload is unsustainable, and the hospital is trying to block them from forming a union.

Longmont United Hospital nurse Kris Kloster speaks to other nurses and supporters December 2, 2021, outside the hospital. They say the hospital is severely understaffed, their workload is unsustainable, and the hospital is trying to block them from forming a union.

Nearly a third of the hospital’s registered nurse staff has left since the start of July and many have not been replaced, she says.

The stress nurses and doctors feel is compounded when they feel powerless to take what they regard as an ethically correct action in treating a patient.

There’s a term for that, “moral distress,” says Dr. Barbara Statland, a hospitalist at Denver Health. The tension comes “because you can’t do what you feel is ethically proper. And I’d say that health care workers have been riddled with this.”

‘They saved my life’

Despite the stress and distress, many frontline providers are hanging in there, continuing to care for patients every day. That made the difference for at least one COVID-19 patient who said he was able to get care — just in time.

Rob Blessin from Fort Collins caught the virus this fall and spent 30 days in an ICU ward with pneumonia at North Colorado Medical Center in Greeley. The 58-year-old described the efforts of his doctors and nurses as heroic, some working nine or 10 days in a row, many taking overtime.

“They saved my life. I do feel grateful for everything they did,” says

Blessin says as more coronavirus patients got admitted staff struggled to keep up. “There was just so many people there and very few staff,” he says.

Blessin says he landed in the hospital because he was swayed by internet misinformation and didn’t get vaccinated. It’s a decision he came to regret.

“I guess my recommendation would be to get vaxxed, you know, even if you’re totally against it. Don’t fall into the internet hype,” Blessin says.

After his experience being hospitalized for a month due to the coronavirus, and having talked with his physicians there, he now plans to get vaccinated.

This story was produced in partnership with KHN and Colorado Public Radio.