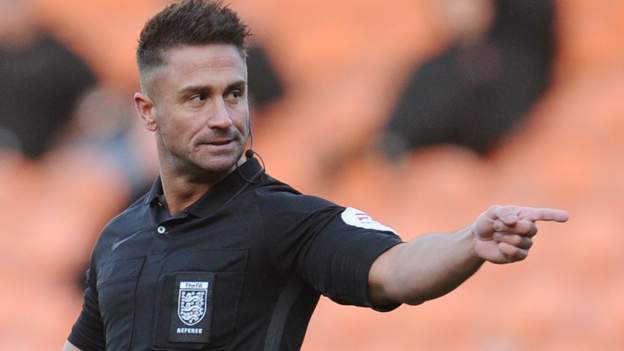 “I’m very appreciative of the fact that I’m an openly gay man in football.”

James Adcock is a familiar figure in the English game, having refereed more than 500 matches in a career that has taken him from amateur level all the way to the Premier League.

In an exclusive interview with the BBC’s LGBT Sport Podcast to coincide with National Coming Out Day, Adcock has been reflecting on his time in the game – and explaining why now is the right time to open up about his sexuality.

‘Referees aren’t robots, we’re not the bad guys of football’

With a childhood love of football and a father who officiated in the Football League, perhaps it was inevitable Adcock would find his way into refereeing.

“When I started to get into it, it was like: ‘Woah, this is the journey I’m going to take,'” he tells BBC Sport.

“My whole life has revolved around sport and fitness. So to get into refereeing was following in my father’s footsteps.”

Adcock, 37, initially combined officiating with his job as a PE teacher.

Then, in 2016, he was appointed to the EFL’s Select Group 2 – making him a full-time referee who took charge of matches in the Championship, as well as acting as a fourth official in the Premier League.

In many ways, it was his dream assignment.

“The best moments are walking out to the crowds on the opening day, at Christmas, for the last game of the season when it means something to a certain club.

“This is the best sport in the world, and we enjoy that just as much as anyone else.”

As a child of the ’80s and ’90s, Adcock was used to hearing the same tired stereotypes – that people who loved sport couldn’t be gay as well.

Adcock didn’t come out until he was 27 – but his experiences within the game have been nothing but positive.

“As I was going from part-time to full-time in football, some knew and some didn’t,” he says.

“Now all my colleagues know, and it’s just the norm. And, to be honest, there’s been interest from colleagues saying, ‘I’m proud of you James, that you’re able to be openly gay in sport,’ because they know the barriers that are still in place.

“They’re fully supportive and don’t change the way they are around me or the way they speak to me because they thought I was a heterosexual guy, and now they find out I’m a gay guy.

“I don’t need to wear a T-shirt saying: ‘I’m James Adcock and I’m a gay guy.’ People know and just accept it.

“I’ve not had any homophobic abuse thrown at me, and I can’t tell you a story where I’ve had to combat or overcome that.”

‘From the top level down, there’s not an issue’

Adcock is the highest-level male official to speak publicly about his sexuality in English football, following Ryan Atkin, who came out in 2017.

Now he is looking to support others who might find themselves in a similar situation.

“A lot of referees will think they can’t come out because it’s going to affect their progression within the sport,” he says.

“But you are not judged by your sexuality – and if you are confident enough in yourself, you’re going to have every support from every colleague, and it’s not going to affect you.

“To come out as gay or not come out as gay, you have to choose that as a person and not as a ref. But from the top level down, there’s not an issue.”

‘My family, friends and football colleagues have been so supportive’

After some injury problems, Adcock has returned to refereeing in the Football League on a part-time basis, and used lockdown to start an online health and fitness consultancy.

“For me to feel confident, I like to feel good and be the best that I can be,” he says.

“I wanted to put that back into the community, and I’m enjoying helping other people do what has made me successful. If I can look after my body and myself, I want to help others to that as well.”

And he hopes speaking publicly about his sexuality won’t change the way he is viewed when he next takes charge of a Football League game.

“Just treat me the way you’d treat anyone else,” he says. “You’re there as a supporter, a player or a manager – and you judge me on my performances.

“That’s where my family, my friends, and my football colleagues have been so supportive – because it doesn’t matter that I am gay and involved in sport, and refereeing in the Football League.”

James Adcock was speaking to the BBC’s LGBT Sport Podcast. You can hear new episodes every Wednesday via BBC Sounds.