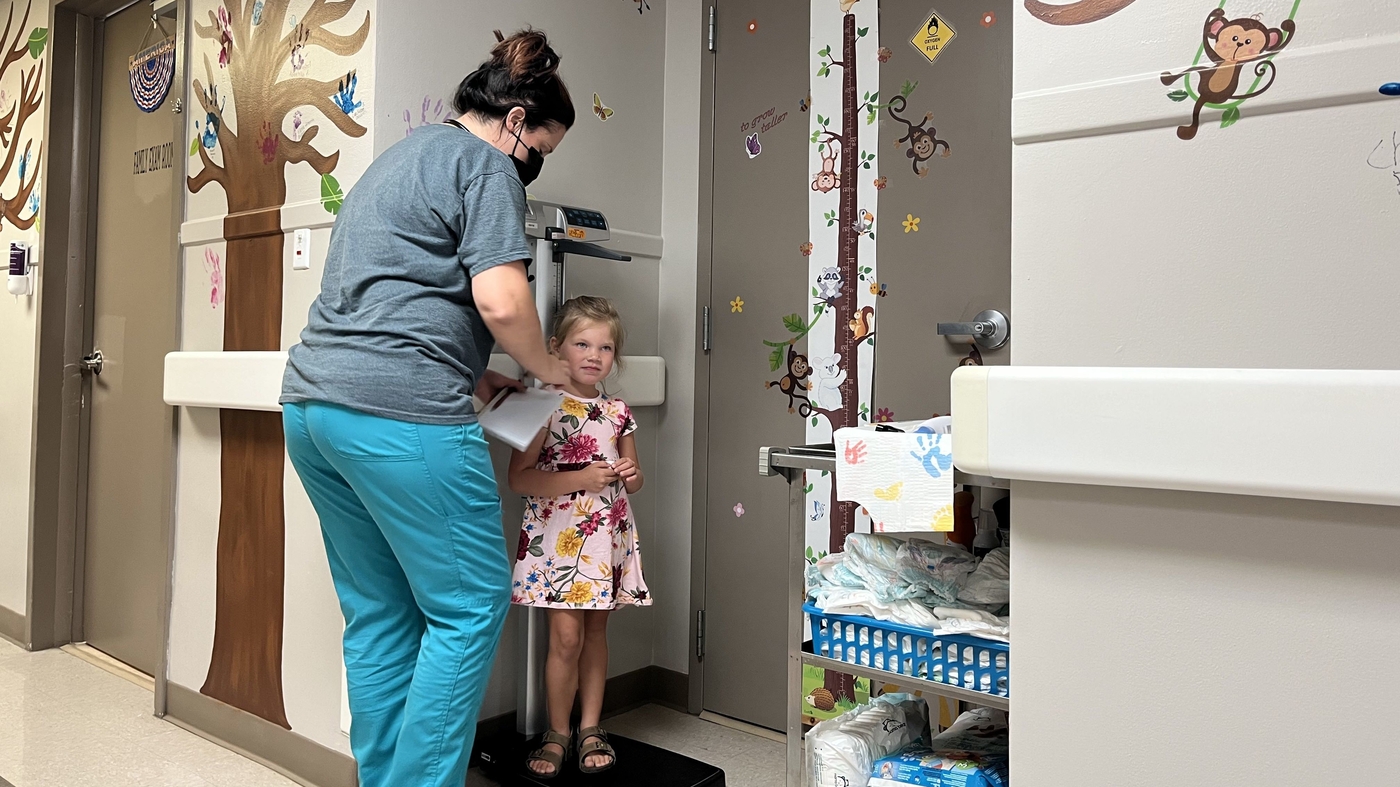 Khloe Tinker, 5, is measured ahead of an appointment at the Doniphan Family Clinic in Doniphan, Missouri. The clinic is the only source for specialized pediatric care in its rural Ozark county.

Khloe Tinker, 5, is measured ahead of an appointment at the Doniphan Family Clinic in Doniphan, Missouri. The clinic is the only source for specialized pediatric care in its rural Ozark county.

Kathreen Friend is a pediatric registered nurse based in Doniphan, Missouri — a small town of about 1,800 near the Arkansas border. As the lone pediatric specialist in Ripley County, she stays extremely busy. She works long hours at the nonprofit Missouri Highlands clinic, and visits nearby schools for health screenings.

“I see a large volume of kids every single day,” Friend says. “It makes for long hours and long days, but we try to get people taken care of.”

Friend’s clinic is located in a building that used to be the county’s former hospital, but the hospital closed in 2018. The safety-net clinic treats both insured and uninsured patients, and sees a wide range of ailments, from broken bones to ear infections to COVID-19.

Most of Friend’s young patients are covered by Medicaid, the government health insurance program for low-income people. More than 2,200 children, out of Ripley County’s total population of 10,000 receive some sort of public health coverage.

Millions of children across the U.S. rely on Medicaid for health coverage. Since the start of the COVID pandemic, a federal emergency declaration has allowed them to receive continuous coverage — without having to re-enroll, or jump through bureaucratic hoops.

In Missouri, Medicaid enrollment overall has grown by more than 400,000 since the start of the pandemic. That’s one of the biggest per-capita increases in the country, largely driven by a 2020 ballot referendum to expand Medicaid to more Missourians.

States and the federal government split the cost of Medicaid. Although many federal rules apply, states manage the program and have flexibility in deciding who qualifies for the coverage based on income.

Before the pandemic, Medicaid recipients across the country regularly had to prove to their states that they still qualified for the program — meaning, they had to document that their income was still low enough, and they didn’t have access to other affordable coverage options such as job-based insurance. This process of requalifying is called redetermination, and can involve a lot of paperwork and time.

But after the Covid pandemic began, the federal government declared a national public health emergency (PHE). That helped speed up the development of new vaccines and treatments, made the Covid shots free, and loosened rules around telehealth and other aspects of health care.

In the Medicaid program, redetermination was suspended under the PHE. Once on Medicaid, people would continue to qualify, without having to do anything.

The idea was to keep people insured when they might get sick during the pandemic, and provide relief from social and economic disruptions that would make redetermination unduly burdensome — for both patients and the state agencies.

But in Missouri, doctors and advocates are worried about the end of the public health emergency, and its impact on children in particular. That’s because the state has a spotty track-record when it comes to managing its Medicaid rolls, and making sure that Missourians who do qualify get — and keep — that insurance.

Missouri fears are based on past problems

Dr. Maya Moody, president of the Missouri chapter of the American Academy of Pediatrics, points to an incident from the past, when the state removed some 100,000 children from Medicaid back in 2019.

“I mean, we were turning away kids left and right and it just broke our hearts,” Moody says.

In that instance, Missouri had paused redeterminations to roll out a new computer system for managing Medicaid. When it resumed redetermination, many children who still qualified were inadvertently dropped from the program.

“These are kids that we needed to see and they were our routine patients,” Moody says.

State officials later acknowledged the nature of the error: if parents in a household lost eligibility for Medicaid coverage, their children automatically lost it as well, despite children having a different income threshold to qualify. State officials say they’ve fixed this error.

The federal government renewed the Covid-related public health emergency on Oct. 13, for another 90 days. That means the PHE could expire on Jan. 11, 2023 — unless there’s another renewal. When it ends, all states will have to resume regular checks on who qualifies for Medicaid, or not.

It will be a big, sudden lift, says Sara Collins, an economist and senior scholar with the Commonwealth Fund.

“States are going to be faced at the end of the public health emergency with a gargantuan task of redetermining eligibility for people who have stayed on Medicaid over this two year period,” Collins says.

Another potential problem is that many people quit during the pandemic, so it’s unclear if states have the workforce they need for the task.

All these factors leaves Dr. Moody, the Missouri pediatrician, worried that her state just isn’t ready.

“These are families that we know really well, and so… one of the true blessings of the public health emergency is we haven’t had to turn anyone away.”

Moody fears many Medicaid patients — and children in particular — will be wrongly dropped from coverage or fall into the bureaucratic gaps. To prevent this, she’s telling Medicaid patients they will need to be proactive about keeping their coverage.

“We have already started to talk to folks about making sure they’re getting their documents together and they’re ready to reapply” once the emergency declaration expires, Moody says.

How Missouri is getting ready — and how health care could help

Missouri’s readiness to handle the upcoming work remains a question. After expanding Medicaid in 2021, Missouri struggled to process all the new applications, and by February 2022 the waiting period reached 119 days, on average — far beyond the federal requirement of 45 days or less. State officials now say they’ve reduced its backlog of Medicaid applications, but have not disclosed the current average wait time, except to say that it is now within the 45-day federal limit.

Still, pediatric advocates worry that lengthy processing times would mean long waits for children to get care, or gaps in their coverage. The federal government could decide in November to renew the PHE for another 90 days past Jan. 13, 2023. But even if it does, almost everyone agrees it will be ended at some point.

The federal government is already discussing the problem with states, and is recommending that they approach the redetermination work gradually, dividing up their Medicaid caseload into smaller chunks.

A spokesperson for the Missouri Department of Social Services said in an email the agency is working now to verify all Medicaid recipients’ addresses, so when it’s time, they will receive the required paperwork.

All that paperwork concerns Friend, the pediatric nurse in Doniphan. She is especially concerned about her patients who got covered for the very first time during the pandemic and have never had to go through the process of redetermination.

She knows she is part of the solution, and must educate her patients about the coverage rules, as well as talk to them about their health issues.