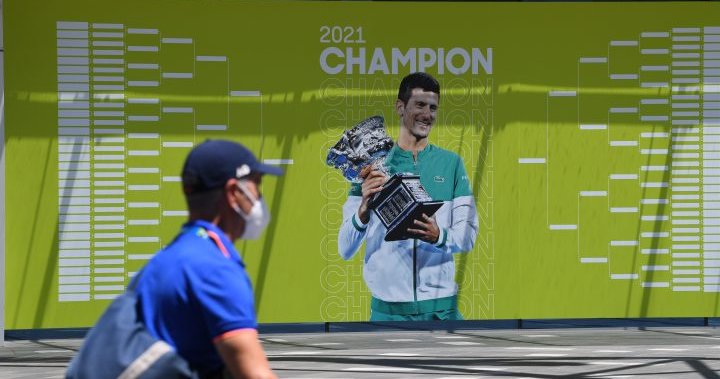 A legal battle between tennis star Novak Djokovic and the Australian government over his COVID-19 vaccination status came to an end Sunday with the Serbian player being deported a day before he was set to begin his title defense at the year’s first Grand Slam.

The men’s world number one player had his visa revoked twice in a span of 10 days after receiving a medical exemption from the COVID-19 vaccine requirement to compete at the Australian Open in Melbourne.

That exemption – organized through Tennis Australia – was granted on the grounds that the unvaccinated Serb tested positive for COVID-19 last month. But the government said a recent infection alone did not meet its standards for an exemption.

On Sunday, Australia’s federal court dismissed Djokovic’s appeal, upholding the government’s decision to cancel his visa for a second time.

The Djokovic saga has sparked widespread anger in Australia – which has imposed some of the world’s strictest COVID-19 measures – polarized tennis fans and raised questions about how officials handled the case.

Kerry Bowman, a professor of bioethics and global health at the University of Toronto, said while high-profile athletes should not be getting a pass when it comes to COVID-19 measures, enforcing rules that are “ambiguous or subject to interpretation” can be “very problematic” in the context of a global pandemic.

“The fact that we get it right with athletics, I think really matters because athletes are absolutely, without question … role models for many, many people, and they have profound influence on people.”

The stakes are much higher the bigger the name involved, he said.

Djokovic, who has not publicly disclosed his vaccinations status, is amongst the most famous professional athletes to have opposed COVID-19 vaccination.

NBA star Kyrie Irving, who plays for the Brooklyn Nets and Green Bay Packers quarterback Aaron Rodgers are among others who have refused the shots.

Major sports leagues in the United States – NBA, MLB, NHL, NFL and MLS – have encouraged COVID-19 vaccines but not mandated them.

Unvaccinated athletes are subject to additional restrictions and different protocols compared to those who are vaccinated.

According to the International Tennis Federation (ITF), which is responsible for the four grand slams, participants are exempt from testing and screening protocols if they have tested positive for COVID-19 between 10 days and 90 days prior to arrival at an event, or have been fully vaccinated with a WHO-approved vaccine at least 14 days before the tournament.

In soccer, the English Premier League (EPL) has not made vaccines mandatory, but Italy and France do require all league players to be fully immunized as per those countries’ rules for professional sports.

2:08
Beijing Olympics: China taking no chances with COVID-19 as Games near

Beijing Olympics: China taking no chances with COVID-19 as Games near

At the upcoming Beijing Winter Olympics next month, anyone who is not fully vaccinated will need to quarantine for 21 days upon arrival.

The IOC playbook for the Games states that exceptions may be granted for athletes and team officials to enter the closed loop without quarantine on a case-by-case basis, based on medical reasons.

COVID tests and police escorts: What it’s like in Beijing Olympics’ ‘closed loop’

Among those reasons are: severe allergic reaction to a component of a COVID-19 vaccine; myocarditis or pericarditis following an mRNA COVID-19 vaccine; serious adverse event following immunization; or pregnant person coming from a country where vaccination is not approved for them.

The Canadian Olympic and Paralympic committees as well as the United States Olympic Committee have gone one step ahead in mandating COVID-19 vaccines for all their athletes competing in Beijing.

Prior to Jan. 15, unvaccinated players in the NBA, NHL, MLB and MLS were permitted to cross the Canadian border under a national interest COVID-19 exemption. But starting Saturday, all unvaccinated professional and amateur athletes will no longer be able to travel to Canada.

“We need more consistency with global rules related to this – there’s no question,” said Bowman.

Helen Jefferson Lenskyj, a retired professor from the University of Toronto specializing in critiques of the Olympic industry and gender issues in sport, said the criteria for vaccine exemptions for athletes should be no different than they are for an average citizen applying for a visa to enter another country.

Professional athletes should wait their turn for vaccines, just like everyone else

More than 20 months into the pandemic, Lenskyj argues that it shouldn’t be too difficult to come up with a standardized approach that international federations could clearly circulate to national Olympic committees and other sports governing bodies so it’s completely clear what the expectations are in the host country to avoid ambiguity.

2:41
COVID-19: How Omicron is impacting major sports amid new restrictions

Should the nature of the sport – whether it is a team, contact, non-contact or individual event – be taken into account when making the rules?

This is because the “risks lie primarily with being actively infected while participating with fellow players in a match or tournament,” he told Global News.

The World Health Organization (WHO) says the decision on whether vaccines should be a pre-requisite for travel is down to the member states.

“We hope that countries make evidence-based decisions suited to their specific contexts rather than politically-motivated measures,” the WHO told Global News in an emailed statement.

From a practical standpoint, getting every sport on the same page won’t be straightforward because of the different COVID-19 rules in each country.

Steve Indig, managing director and a lawyer with Sport Law in Toronto, said while it would be optimal that athletes have consistent entry requirements for competing the world over, its “very unlikely” to be seen given the political effects that COVID-19 has had in every country, province and state.

Richard Powers, associate professor at the Rotman School of Management at the University of Toronto, echoed that sentiment.

“I think it’s going to be hard to make an overall mandate on all these leagues that everyone has to be vaccinated,” he told Global News.

Even without blanket mandates, unvaccinated athletes are paying the price for refusing COVID-19 vaccinations.

In Djokovic’s case, that has meant not being able to defend his Australian Open title and chase a record-breaking 21st Grand Slam crown, not to mention the embarrassment of being detained and deported.

In the NBA, Irving can only play away games for the Nets because of New York’s vaccine mandate.

“Where these people are being paid millions of dollars it comes down to freedom of choice and their willingness to accept the consequences of that,” said Powers.