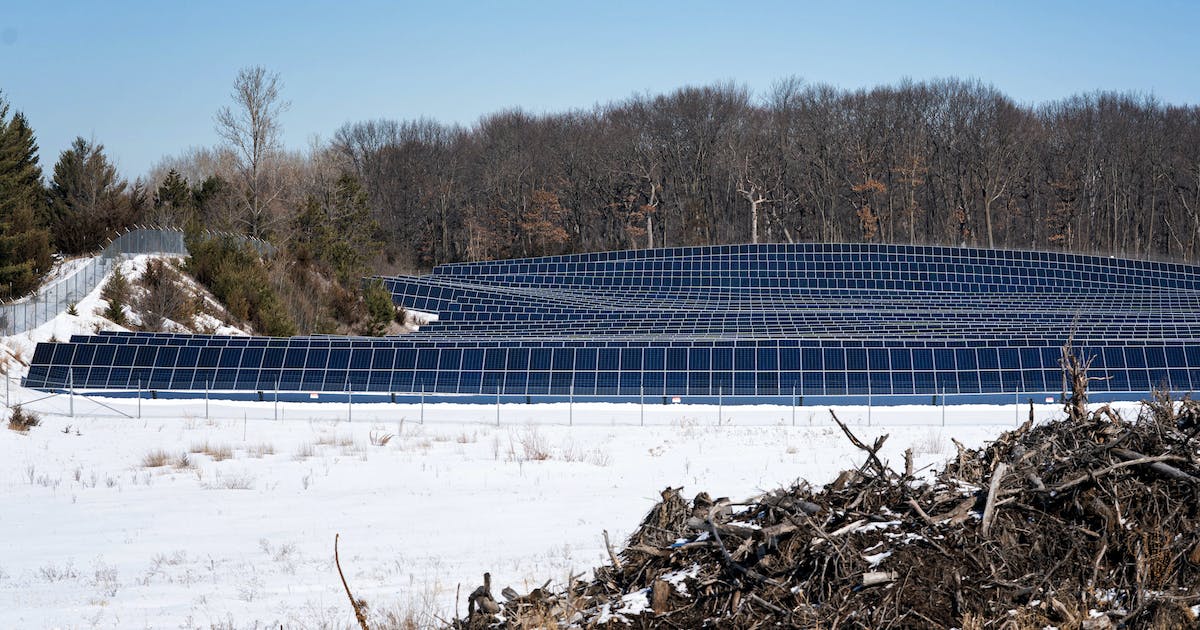 It would be one thing if the rural residents of Washington County were arguing against the creation of solar farms (“Solar vs. scenery: Panels sow division,” front page, March 20) because the developers were proposing to clear-cut native forests, natural prairies or water-cleansing wetlands to create these solar panel arrays. But there’s really not much that’s inherently more “natural” or attractively rural about mammoth fields planted with genetically engineered corn, irrigated by enormous circulating irrigation wheels that are lowering groundwater supplies at an alarming rate; corn that, for the most part, will be used to produce livestock feed to nurture cattle that produce methane gas as they provide federally subsidized beef that helps Americans keep their cholesterol at record levels; and fields that are sprayed with thousands of gallons of chemical pesticides and herbicides that are mandatory if you want to grow trademark-protected hybrid plant species produced by Cargill and other corporations.

I, for one, think that solar arrays and wind farms are a heck of a lot more visually attractive than much of what passes for “natural” rural agriculture these days.

Some seniors in Albert Lea are surprised and upset because they pay out-of-network fees to use their local MercyOne clinic that is not in their Blue Cross and Blue Shield provider network (“Albert Lea seniors caught in insurance quagmire,” Business, March 20). They are asking the Minnesota attorney general to jawbone Blue Cross to alter a federal Medicare Advantage plan. Blue Cross is the wrong target. The real villain is staring back from the nearest mirror.

These people are shooting themselves in the foot by ignoring the annual changes in their Medicare Advantage plans during the fall open enrollment period and changing plans if necessary. Also, they are ignoring the January-through-March Medicare Advantage opportunity to change plans if they are unhappy. Moves to different plans can still be made. I suggest they call the Senior Linkage Line for advice today.

As a former Medicare educator for over 20 years, I have informed folks who are considering choosing Medicare Advantage over original Medicare that they will be managing the quality and cost of their health care by engaging in an annual battle of wits with a group of insurance companies. The plans have changing features including premiums, copays, prescription drug costs, provider networks and non-Medicare benefits. Done correctly, this challenge is daunting, and most ignore it.

Consequently, the seniors in Albert Lea should be prepared to make tough decisions. For example: Is switching to a plan with MercyOne in network acceptable if it has a prescription drug plan that is much more expensive than the Blue Cross drugs? Which of your current doctors are not in the network with MercyOne?

Minnesotans should be furious but not surprised by the massive release of 300,000 gallons of water from Enbridge breaching three aquifers during Line 3 pipeline construction (“DNR: More Line 3 aquifers damaged,” March 22). Thousands of concerned Minnesotans gave expert testimony, wrote letters and publicly protested about the environmental and social injustice of the pipeline. Enbridge argued that the project could be done safely and provide several hundred good-paying Minnesota jobs. Instead, many workers were brought in from out of state, one worker died, and the sex trade business arrived in nearby local communities. We are now left with a pipeline that for years will flow with the most toxic tar-sands oil on the planet.

Enbridge, the Minnesota Department of Natural Resources, the Minnesota Pollution Control Agency and Gov. Tim Walz should all know that we knew the project would never go smoothly and that the pipeline oil spills will eventually occur. Pipelines and hard-rock mining have never been built or operated without some form of disaster.

In the words of Pete Seeger, “When will we ever learn.”

The Enbridge Line 3 debacle is tragic and would have been avoidable had our governor and lieutenant governor acted with courage and foresight early on to stop the project. I visited a Water Protector site along the northern banks of the Mississippi River months ago and was horrified by the clear-cutting of trees and damage along the river, and by the stories of the Indigenous Minnesotans protesting the project from the start. Now we are hearing — after months’ delay — of many aquifer breaches and damage to the surrounding land and water, all of this for dirty tar-sands oil from Canada. This lifelong Minnesotan is heartsick about our fealty to nonrenewable energy and our lack of regard for the sanctity and fragility of our water and land.

While the March 22 article “Bill aims to find solution for outdoor encampments” is a commendable beginning in acknowledging the timely need to fund emergency shelters in Ramsey County, it fails to capture the magnitude and scope of this issue.

As an intern with the Minnesota Coalition for the Homeless, I’ve had the incredible opportunity to interview more than a dozen individuals from across the state who work in emergency shelters and/or have lived experience with homelessness. I have been faced with the unfortunate reality that homelessness is not merely an urban crisis, but one that devastates the lives of young people, Indigenous communities, domestic-violence survivors, families, and others from both rural and urban communities.

Though the article highlights the “funding cliff” that leaders in Ramsey County are facing as they seek to secure $14.5 million in state dollars, the financial needs for emergency shelters across the state at large exceeds this at $95 million in needed funding for the Emergency Services Program over the next three years. Mary Westlund from New Pathways, a provider in Cambridge, highlights this during an interview: “We’re in a very small community. We don’t have access to the large funding streams that are available in the metro area.” Shelters like New Pathways face the risk of needing to close their doors or gravely failing to meet the growing need for shelter in their communities.

As Sen. David Senjem, R-Rochester, relayed in the March 22 article, the need for bipartisan support in allocating funding from this historic surplus toward providing shelter must eclipse both geographic and political boundaries, including county lines.

A March 23 letter writer cited U.S. Rep. Ilhan Omar’s vote against the infrastructure bill as a sign of her lack of support for President Joe Biden. But we need to look at this in context.

Omar and a handful of progressive House members voted against the infrastructure bill because they felt the only way to get Sen. Joe Manchin to negotiate in good faith on the Build Back Better bill was to tie it to passage of the infrastructure bill. Turns out that Omar and her colleagues were absolutely correct. Weeks after the passage of the infrastructure bill, Manchin declared that he could not support the Build Back Better bill, despite the fact that the total cost had been scaled back due to his demands and many of the environmental protections had been stripped away so that Manchin could continue to make millions off coal.

There are things about Omar that can be criticized, but with her vote against the infrastructure bill, she made the right call, while many Democrats, including President Biden, made a foolish choice in trusting Manchin.

We want to hear from you. Send us your thoughts here.