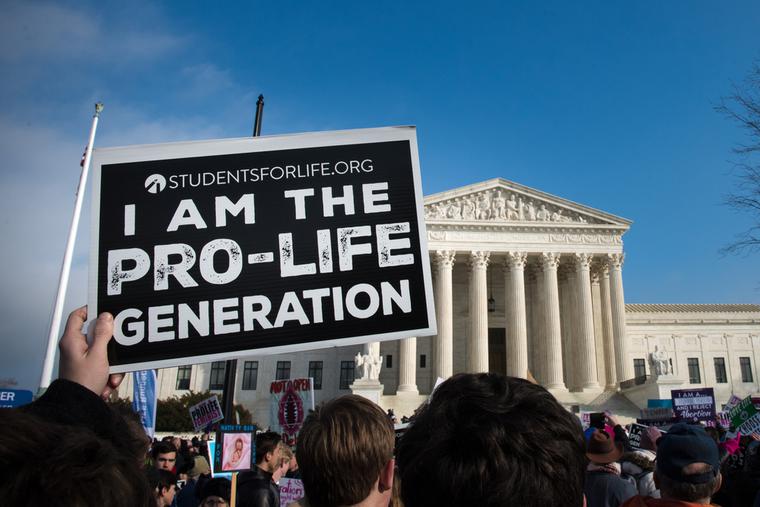 ‘The mass killing of the innocent through abortion is the greatest crisis we face as human beings.’ — Lila Rose of Live Action

Catholics across the country are gearing up for a monumental day as the Supreme Court is slated to consider Mississippi’s 15-week abortion ban tomorrow, a case that many consider to be the tipping point for ending the terrible scourge of abortion in our land that came with the landmark rulings, Roe v. Wade and Planned Parenthood v. Casey.

Pro-life leaders and Catholic commentators have been covering this high-profile case on the heels of more than 80 amicus briefs filed in support of Mississippi’s abortion ban. For those anxious to keep up with the case and to learn what is at stake, here are some of the best takes on the issues at hand.

In a commentary piece earlier this year, Gerard Bradley wrote:

The court can hardly continue to give its imprimatur to Roe v. Wade. The Roe Court has been justly criticized on its own terms, for finding a constitutional right to extinguish the ‘potential life’ within the womb, even though the Constitution nowhere bespeaks such a right and where centuries of jurisprudence treated abortion to be a crime. The present court’s majority should therefore be emboldened to overrule Roe by its candid recognition of the two truths of the matter.

Legal scholar Helen Alvaré spoke with the Register’s Jeanette De Melo about this crucial moment for the high court:

I read these documents, and what struck me was that the present law was lawless. I mean, really, even in the last trimester, every state must permit abortion if the mother’s ‘life or health is at stake,’ and health is defined to include even psychological distress and unhappiness with being pregnant.

So, I’m thinking, we have unlimited abortion. I’m reading the arguments from both sides. And from the very beginning of looking through those files, I saw it as a matter of the movement for truth. That’s why I’ve never seen it as a single issue. It was the movement for reason, empirical evidence, science — use your eyes; use your heart; and use them all together.

Pro-abortion politicians have been sounding the alarm on the possibility of the court ruling in favor of Mississippi and potentially upending Roe. Just days before oral arguments are heard tomorrow, Sen. Jeanne Shaheen, D-N.H., released a statement speaking to a ‘revolution’ that will occur if the court overturns Roe v. Wade. Shaheen said:

I’ve lived the consequences of the pre-Roe era – I had friends in college who were forced to seek dangerous back alley abortions because women across the country were denied access to critical family planning services. We cannot allow Republican lawmakers to turn back the clock on women’s reproductive health and rights, which is precisely what the Mississippi case seeks to do. It is time to sound the alarm.

The Democratic senator added, “Roe v. Wade isn’t just a decision that impacts women, their health and their financial security — it also impacts generations of families.”

But for the younger generations that grew up with ultrasound imaging, detailing the real life and movement in the womb, these fear-mongering comments don’t really reverberate, especially as the reality of fetal pain has become more clearly established.

Lila Rose, who founded her organization Live Action at the young age of 15, is one of thousands in the pro-life community who call for compassion for the tiny lives now not so hidden in the womb. She says:

The facts about abortion are devastating, but must be known: these 2,363 precious lives are killed through chemical abortions — starved of nutrients, then forcibly miscarried, or torn into pieces by suction and removed from their mothers, or torn limb from torso by forceps while still alive, before their skulls are crushed, or stabbed in the heart or head with a lethal injection. … The mass killing of the innocent through abortion is the greatest crisis we face as human beings.

Ross Douthat wrote in an op-ed for the New York Times about the pro-life case we have now before us, colorized by the true science that can no longer be denied in the fuzzy ultrasounds of the 1970s. Douthat writes:

There is no way to seriously deny that abortion is a form of killing. At a less advanced stage of scientific understanding, it was possible to believe that the embryo or fetus was somehow inert or vegetative until so-called quickening, months into pregnancy. But we now know the embryo is not merely a cell with potential, like a sperm or ovum, or a constituent part of human tissue, like a skin cell. Rather, a distinct human organism comes into existence at conception, and every stage of your biological life, from infancy and childhood to middle age and beyond, is part of a single continuous process that began when you were just a zygote.

We know from embryology, in other words, not Scripture or philosophy, that abortion kills a unique member of the species Homo sapiens, an act that in almost every other context is forbidden by the law.

Turning to the argument that abortion is really a tenet of feminism and therefore belonging to the equal rights of women, Douthat points to the fact that this entire notion then is fine with killing the unborn child — a voiceless one at that.

But doctors know intimately the movement and mannerisms of the unborn all set on stage in beautiful imagery. 3-D ultrasounds offer a glimpse of life that implores us to consider, leading three female physicians to write an amicus brief exploring their own work, even performing surgeries in-utero. Radiologist Dr. Grazie Christie tells the Register, the science cannot be ignored.

“Now, however, ultrasound has established the liveliness and humanity of the fetus at 15 weeks as something incontrovertible. All the world has seen the delightful image of the second-trimester baby in her mother’s womb, kicking, moving, living.”

“It’s time for our abortion laws to acknowledge this reality, Dr. Christie added.

Legal scholar at the University of Notre Dame Carter Snead penned a piece alongside Harvard professor Mary Ann Glendon, making the case for Roe to be overturned based on the fact that the Supreme Court’s abortion precedent is “completely untethered” from the history, text, and tradition of the Constitution.

“American abortion jurisprudence is profoundly misguided in one final way, which runs deeper still: It entrenches in our nation’s foundational legal framework a concept of humanity that is both false and pernicious, and that denies basic human compassion to the vulnerable mothers, children, and families involved.”

The national conversation on Dobbs has also brought to light a true feminism, one that has been lost amid the rampant calls for ‘keeping rosaries off ovaries.’ One that keeps the family unit and conjugal love safe from the cancer of contraception and individualism. Leading the charge is the voice of Erika Bachiochi who has written extensively about the history of feminism in her new book. In a recent piece for the National Review, Bachiochi obliterates this idea of reliance on abortion, which the legal scholar points to as the thread that both Roe and Casey hinge upon.

The very idea of relying on abortion for women’s equality would seem to have a rather nefarious historical analogue. When Elizabeth Warren, then a Democratic presidential candidate, hailed abortion rights as ‘economic rights,’ and when both state officials and corporate consultants speak of the business case for abortion, is not the logic eerily parallel to how Democratic legislators in the South justified slavery? Slaveholders ‘relied’ on enslaving black human beings for their economic well-being; women workers, we are told, rely on ending the lives of their unborn children for the same.

Of course, another part of this equation is the public knowledge of the business of abortion — an aspect notably brought to light by undercover investigator and journalist David Daleiden, who exposed Planned Parenthood for the money they make not only with the killing of babies, but in finding profit in the pieces of broken lives torn apart. House investigations into aborted baby parts being sold for profit are real stories and they can’t be forgotten in this moment, since they really do speak to this lawlessness that we now live under.

Currently, some states like New York and California allow for abortion up to the moment of birth. Abortion is no longer rare. It is shouted and celebrated while the innermost wounds of young men and women remain unhealed.

Women deserve better. And so do babies.

Pray for their voices to be heard in the Dobbs case!