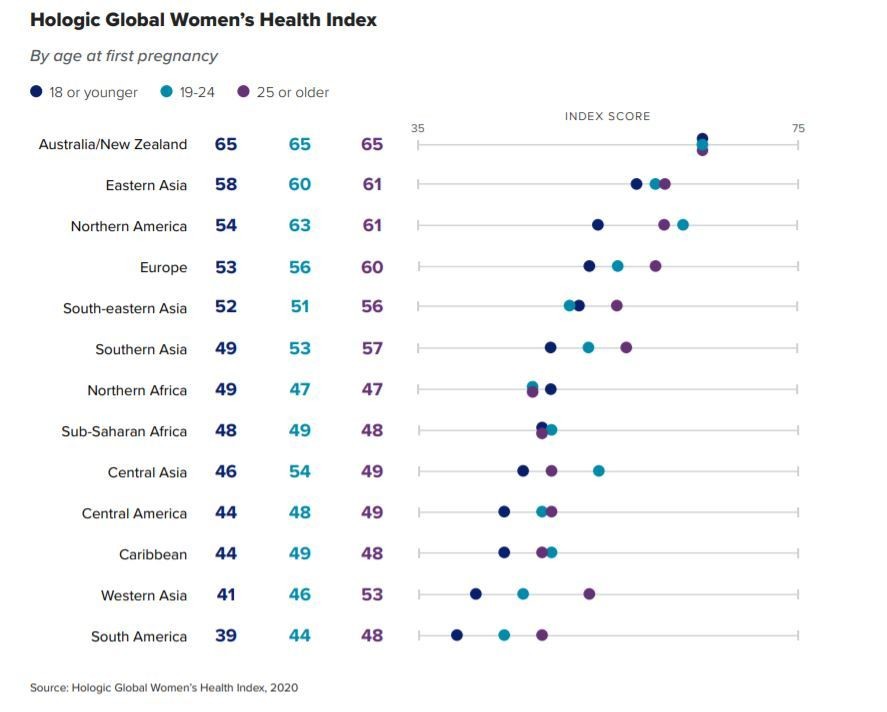 Over the past year, more than 1.5 billion women worldwide were not tested for some of the most prevalent and pernicious diseases women face: cancer, diabetes, high blood pressure and sexually transmitted diseases/infections (STDs/STIs).

That’s one of the findings of the inaugural Global Women’s Health Index, developed by medical tech company, Hologic. Based on the experiences of more than 60,000 women and girls from 116 countries, the Index ranks countries with a score out of 100. The global average is just 54, Hologic says, with the highest score (69 out of 100) going to Taiwan and the lowest to Peru (36).

“Women’s health is the cornerstone of families, communities, societies and economies,” Hologic’s Chairman, President and CEO, Stephen MacMillan, said in a press statement. Explaining the rationale for the Index, MacMillan continued: “We saw a clear need for more robust, quality data to track and measure women’s health on a global level – particularly as COVID-19 has worsened longstanding healthcare disparities.”

In almost all regions covered by the Index, women who became pregnant at a young age (under 19) were more likely to experience life-long negative effects on their education, health and livelihoods. This is true everywhere other than Australia and New Zealand, which buck this global trend.

Cancer remains one of the most prevalent – and most worrying – illnesses, blighting the lives of many millions of people. It is the second-leading cause of death globally (heart disease is the biggest killer) and caused an estimated 9.6 million deaths in 2018, according to the index.

The most common causes of death by cancer for both men and women in 2020, according to Hologic, were:

Despite this, cancer screening rates for women, worldwide, remain low. The Hologic Index found that: “No country or territory has tested more than 38% of women for any type of cancer – and in a host of countries, the percentage is less than 10%”.

South Korea scored the highest here. By comparison, fewer than 1% of women in Pakistan said they had been tested for cancer in the preceding 12 months.

The index also looked at emotional health among women. Overall, women scored 68 on the Emotional Health dimension of the Index, ranging from 89 in Taiwan to a low of 39 in Iraq. Women below the age of 75 were more likely to experience negative feelings, as were those who experienced their first pregnancy before age 19, Hologic says.

Reflecting on how the pandemic affected emotional well-being, the Hologic Index said: “Women aren’t alone in feeling this way. People worldwide in 2020 were feeling the worst they had in 15 years. Global experiences of worry, stress, sadness and anger continued to rise in 2020 and set new records. Stress alone increased from 35% to 40% worldwide in the span of a year.”

The index authors hope to provide policymakers and global leaders with guidance on what healthcare interventions are likely to have the greatest impact on women’s lives.

It has already identified a correlation between performance on the index and a woman’s average life expectancy at birth. Hologic has broken down the healthcare landscape into what it calls five key dimensions – preventive care, opinions of health and safety, emotional health, individual health and basic needs.

It can be tough to stay healthy when living in a big city. The Forum is responding through its Healthy Cities and Communities initiative by working to create innovative urban partnerships, which are helping residents find a renewed focus on their physical and mental health.

In 2020, the project continued to expand to new locations and has effectively helped communities impacted by COVID-19. Our work is continuing with concrete actions in 2021 where best practices and learnings from all partner cities will be shared, allowing other cities to replicate and scale.

In Jersey City, USA the Healthy Cities and Communities initiative is working with AeroFarms to deliver locally sourced vertically farmed greens to people in need. The initiative is also helping homeless people who are disproportionately impacted by COVID-19.

In Mumbai, India (home to more than 20 million people) the initiative is working with the local startup community and engaging them on multiple sanitation challenges.

Learn more and find out how to join the initiative in our impact story.

Differences in the standard and quality of care across the five areas accounts for more than 80% of women’s average life expectancy at birth, Hologic says, adding that making improvements to any of these dimensions could, the Index suggests, help women live longer, healthier lives.

The views expressed in this article are those of the author alone and not the World Economic Forum.